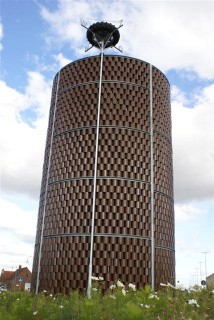 Western stands ten metres tall with a diameter of six metres. The tower was constructed using ceramic components of pipes, measuring 25 cm in diameter and standing 25 cm tall. These were formerly used as sewage pipes. The artist thinks that it is a fascinating idea to build a work of art with a material which is usually concealed underground and which, moreover, is made of earth (clay).

The tower is somewhat transparent. The literally heavy tubes (one tube weighs 11 kg) are hollow. As a result light falls in from every angle and the tower resembles a reed basket or a bee hive. The bearing structure consists of an ingenious steel construction. A large weathervane has been mounted on top of it. A tractor tire is the most conspicuous element.

The tower is a monumental intervention in this flat polder landscape. The artist hopes that the tower’s size and monolithic character will allow it to ‘slowly’ become part of the landscape and village, which on the one hand still has the rural character of an ‘old-fashioned’ polder village, but on the other hand lies on the edge of a region where tourism prevails.

When the artist refers to ‘slowly becoming part of its surroundings’ he means that a public work of art should acquire its place and be incorporated in the community in an unforced way. Although the work of art is monumental and impossible to ignore the artist’s endeavour has always been to create a quiet, neutral work that transcends the boundaries of time.

The tower’s name, “Western” plays upon the words tower in the west or can be considered a contraction of Westkapelle and “toren” (tower) or “torre”.

Dirk Zoete (Roeselare, 1969) lives and works in Ghent. He holds degrees in Graphic Design and Mixed Media from the Royal Academy of Fine Arts in Ghent. He created drawings and works of art using various materials.

His works often refer to architecture, the basic requirements for living. He develops the principles of energy (heat, light and water), space and landscape that may seem less than evident at first glance. Zoete’s works embody a link between the landscape’s reality and the image as perceived by the observer.

Zoete joins different, seemingly irreconcilable worlds in a new universe and thinks that movement (whether quick or slow) reveals an inherent awkwardness that echoes our own vulnerability. Movement is also a metaphor for man who is always searching and who continuously experiences a sensation of loss.