Jeremy Deller - Ask the Animals, and They Will Teach You 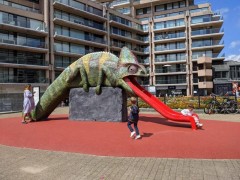 Collaboration characterizes the artistic practice of Jeremy Deller. By involving communities in his art, his work takes on a political meaning and radically undermines the idea of ​​the artist as an individual genius. Take, for example, 2001's The Battle of Orgreave, one of Deller's best-known works, in which he reenacts a confrontation between striking miners and police officers in Thatcher's England. A staging that Deller directed along with people who were actually present during the fight in 1984.
For Beaufort 21, Deller will place a huge chameleon attraction in Knokke-Heist. As a sculpture and slide for children, this work formulates an alternative to the tradition of monuments that are usually very serious, often refer to historical events and sometimes even radiate pure heroism. Instead, Deller pays tribute to one of the oldest creatures on Earth, the chameleon. Some chameleon fossils show that chameleons have been living on Earth for about 60 million years. "There's something magical about chameleons," Deller says, "they can do things we can only dream of and are the most beautiful creatures on Earth. We have to worship them."
The chameleon is slowly disappearing around the world, probably due to climate change, although this is not the main theme in Deller's work. His focus is on inviting children to use the slide and slide down the long tongue.* With this he wants to contradict the idea that art in public space can only fulfill a decorative or commemorative function.
* The slide may only be used by children under 12 years of age.

Jeremy Deller has produced projects over the past two decades that have influenced the conventional map of contemporary art. He started creating works of art in the early 1990s and often showed them outside of conventional galleries. The artist is known for his large-scale performances such as: We're here because we are Here (2016), The Battle of Orgreave (2001), It is What it Is (2009) and Sacrilege (2012).
Deller won the Turner Prize in 2004 for his work Memory Bucket and represented Great Britain at the 55th Venice Biennale in 2013.
2021
2021
UK
1966