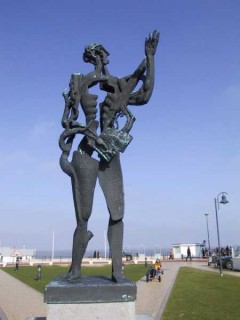 Five specimen were cast from the bronze statue ‘De poëet’ (the poet), also for the city of New York. This statue very delicately expresses the “singer for liberty”. The municipality of Knokke-Heist purchased the statue after the Zadkine exhibition of 1963 in the Casino.

The statue was inaugurated on September 4th 1965, in the presence of the sculptor. The Poet presses Orpheus’ lyre against his chest; it is an ‘incomplete” statue, a plant filled with verses torn loose. The poem Liberté by Paul Eluard was incorporated in the statue.

Zadkine, born in Smolensk, studied drawing and wood engraving at a very young age in England.  As of 1908, he studied at the Arts and Crafts School in London. He settled in Paris in October 1909, where he moved in high circles with Leger, Archipenko and Marc Chagall and where he befriended Modigliani. At the start of 1915, he volunteered for military service and served as a soldier-stretcher-bearer in the French army. In the end of 1917, he got injured during a gas attack.

In 1920, Zadkine married the artist Valentine Prax. As of then, he got inspired by cubism, more particularly in fragmenting bodies and an almost musical rhythm, but remained to produce fundamentally expressionistic work. Very gradually, he distanced himself from cubism after 1926 to create his own style, which was strongly inspired by primitive art. Zadkine exhibited his work in various exhibitions home and abroad.
He evolved with his larger bronze Works into a more open style, always balanced between abstract and classical, matter and feeling.

After his stay in America during the Second World War, he exhibited the works he made there in Paris and Rotterdam; there he was commissioned to create his best-known work The destroyed city. He opened The Ossip Zadkine Studio of Modern Sculpture and

Drawing at the Rue Notre-Dame-des-Champs in Paris, mostly directed at American students. He was awarded the Grand Prize for Sculpture at the Venice Biennale in 1950, and gradually became a celebrity, swamped with new assignments. Zadkine died in Paris. This is also where the Zadkine museum was opened in 1980, exhibiting all his works he left to the city.