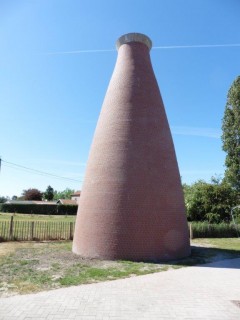 Philip Aguirre y Otegui's sculpture was commissioned by the municipal council of Knokke-Heist as part of the new school infrastructure for De Pluim municipal primary school in Knokke, using various public funds.
On 19 September 2019, Philip Aguirre y Otegui submitted the following concept statement for his proposed sculpture:
‘At my first meeting with the head teacher, staff and pupils of De Pluim, there was a suggestion that I might try and make a work of art that all of them could use.
The monumental sculpture, 10 metres tall, is placed in a strategic location next to the school. It is also clearly visible from the street as a symbol or landmark. The verticality of the sculpture and its colour form an attractive contrast with the predominantly horizontal buildings of the school.
The work has a circular interior (5 metres in diameter) that people can enter, with built-in benches along the walls.
The work is made of brick (Dodona facing brick) and concrete; this is durable and resistant to vandalism. It has an archaic appearance, as if it has been there for years.
At the top of the space there is a circular opening that is not closed off; the entrance is not closed either. This allows light to enter from above and keeps people in contact with nature.
This work aims to be a powerful sculpture, a beacon.
It invites the community of De Pluim to adopt a creative approach.
It is an empty, receptive space in which anything can happen.
It could serve as a shelter.
Maybe it could be a camp or a tent.
It could also be used for workshops.
It might be a place of reflection.
It could become some kind of research lab, such as a weather station.
It can even be used as a kitchen, because the chimney works.
It could be a park pavilion for a picnic or reception.
The possibilities are almost endless.
To make the sculpture, I will work with architect Bart Dehaene to ensure that the elements relating to its construction and structure are approached carefully and sustainably from the outset.
The sculpture does not yet have a definitive title and is being created in collaboration with the architectural firm Bart Dehaene (Ghent) and with Sileghem & Partners (Zwevegem), as well as the support of Steenbakkerij Desta (Hoogstraten), Bouwmaterialen Verhelst (Knokke-Heist) and construction company Van Kerrebroeck bvba (Damme).
Year of creation: 2020

Philip Aguirre y Otegui, born in Schoten in 1961, comes from a family that fled from the Basque Country to Belgium in 1936. He studied at the Royal Academy of Fine Arts and the National Higher Institute, both in Antwerp. Aguirre, who is best known as a sculptor, lives and works in Borgerhout.
His sculptural oeuvre consists mainly of compositions in patinated bronze. However, his work also features materials such as terracotta, plaster, cement and epoxy, sometimes painted or enhanced by the incorporation of existing shapes and objets trouvés. Aguirre also works with etchings, screen prints, drawings, collages and paintings, again often supplemented with collages of found images. ‘Je ne cherche pas, je trouve’ is the perfect adage for Philip Aguirre's open attitude.
Besides his independent works, Aguirre has created many sculptures for public spaces over a period of more than 30 years, both in Belgium and Africa.
Philip Aguirre y Otegui stands for an artistic attitude that is as natural as possible, indeed almost ‘primitive’, and for an artistry that maintains the most direct human involvement in life at all times.
In addition to his solo exhibitions and numerous group exhibitions, his sculptures have been included in the public collections of Mu.ZEE (Ostend), University of Antwerp, Kadehuis (Ghent), Kaprijke, Waasmunster, Ostend, Dossinkazerne (Mechelen), Ndogpassi (Cameroon), Herentals, Zorgcentrum Turnhout, Buurthuis Opexwijk (Ostend), Sint-Niklaas, Wolfabriek Lot (Brussels) and the Saint-Sixtus Abbey (Westvleteren), among others.
In 2017, Philip Aguirre y Otegui won the International Award for Public Art.