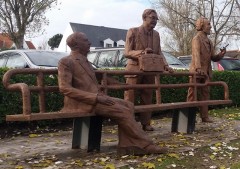 The late alderman, Maxim Willems, had for some years already played with the idea of honouring the founders of the Scharpoord Cultural Centre with a work of art. He had been Alderman for Cultural Affairs for 25 years when he died in May 2014.

The work depicts Eugène Mattelaer, Eric Ruysschaert, Antoon Ghekiere and Robert Willems. Fred Bellefroid managed to characterize the figures on the basis of a small number of photos of the people who served as a model for this sculpture group. For that purpose, he used typical objects such as the famous ‘carnachière’ (briefcase) of Robert Willems, the ‘segarre’ (cigar) and ‘lavalière’ (cravat) of Eric Ruysschaert, and the book ‘Nooit de moed opgeven’ of mayor Mattelaer.

In 1966, Dr Mattelaer became mayor of Knokke, while Eric Ruysschaert became president of the Cultural Association, with Antoon Ghekiere as secretary. Together, they formed a triumvirate which invested its passion, energy and insight into the realization of Scharpoord Cultural Centre. Eugène Mattelaer, who in 1970 became the first mayor of the amalgamated municipality of Knokke-Heist, was the political pioneer who secured the necessary subsidies and political support for the project. Eric Ruysschaert and Antoon Ghekiere encouraged various associations to back the project. The Cultural Centre was built between 1970 and 1975. Robert Willems breathed life into the cultural centre by moving the main library into the new premises of Scharpoord. Robert also founded the senior citizens’ council, which has organized numerous activities there.

The ‘founders’ have now found a place close to their ‘centre’. They can proudly look back on the long road that Scharpoord has travelled since its conception in the mid-sixties and its construction in 1975 to the present cultural centre that is widely appreciated throughout Flanders!

Although Fred Bellefroid is known to the general public for his sculpture ‘De kotmadam’, he also has wide experience making lifelike bronze busts. He likes to create stylized works of people in motion: cyclists, dancers, etc.

Fred Bellefroid, who lives and works in Louvain, has shown his works in numerous individual exhibitions, and has also taken part in several group exhibitions in Belgium and abroad.