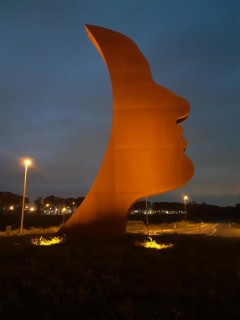 ‘Proud’ is 9 metres tall and weighs three and a half tons. The skeleton is made of galvanised steel profiles finished with weathering steel panels.
Originally, the monumental work was revealed at the Park ter Kalvekete site on the roundabout in Westkapelle (Knokke-Heist) during the 2018 edition of the Tentuinstelling art triennial. The garden’s owner, Marc Ghekiere, allowed it to stand there and attract attention in an original way.
Tentuinstelling is a three-yearly event that has taken place during the Ascension and Whitsun weekends since 2006. Sculptures in a wide variety of materials and styles are exhibited in the private gardens of members of Knokke associations. The participating artists donate part of their fee to cultural and social causes.
William Roobrouck: “When I was asked by Luc Michils (Tentuinstelling) to come up with an eye-catcher, I went to see the location beforehand and thought about what work I could create to establish a link with Knokke-Heist. I asked myself the question: when I think of Knokke-Heist, what springs to mind? I wrote down a few keywords for inspiration: sun, sea, beach, beauty, splendour, pride, beautiful women, trendy, pioneering, sailing boats, etc.
The image of a proud woman walking along Lippenslaan with her head held high kept coming up in my imagination. The beautiful woman is proud and happy to be in Knokke-Heist. This pride eventually became the title of the image: ‘Proud’. The design combines an attractive female profile and the beauty of the moon, as well as the sail of a sailing boat.
In October 2017, during a holiday on the island of Kos, I met a 25-year-old woman from Macedonia. She worked at a hotel and welcomed us every day to serve drinks. Her congeniality, radiant smile and natural beauty erased any doubt. She, Irena, would be the model for the sculpture. With her permission, I took a photo.
When I got home, I began to sketch and came up with technical drawings, leading to the result as it stands today.
I am extremely satisfied with the result. Proud, you might say!”

As a child, William Roobrouck commuted between Ghent and De Panne. He found love on the other side of the language divide and settled down in Laarne around 2008.
He has been passionate about drawing and painting since childhood, following the example of his mother who painted in watercolours. He attended art academy for several years. In his grandfather’s workshop by the sea, he learned to drill, weld and saw when he was still only a child. “Messing around with machines” was what his grandfather did. Perhaps coincidentally, this was at Kunstenaarslaan 6 – Artists’ Lane – in De Panne. They spent countless hours together in the workshop, but William also loved drawing and ceramics and sailing and motorcycle racing and metalworking and engineering and so on and so on...
He was a boy with boundless energy and indelible curiosity. These are two qualities that have not been lost over the years, fortunately!
Under the name ‘Williams’, William Roobrouck creates objects, sculptures, works of art and design pieces which clearly convey his love of shapes, raw materials and handicrafts. From the very first sketch to the final touches of welding, he does it all himself. And he really knows what he’s doing. The materials are carefully selected and processed according to the rules of the craft.
Combine two talented hands and a vibrant imagination with tons of technical skill and those years spent learning alongside his grandfather by the sea, and you get objects with a soul. Whether they combine steel and fire or play tricks with the light, the results are always astounding.